We all know that communication has become faster and easier with the introduction of modern technology; We also all need to understand and avoid the crossing of lines in communication or behaviour that can result in problems for all concerned.

This document has been produced to clarify those lines in some detail, in order that we may protect our Rotary values and our standing in the wider community.

We live in an increasingly litigious society which means we all need to be clear about the rules and conduct, contained below, whether we are in employment, under contract, members of an organisation such as Rotary or volunteers in the widest sense.

Rotary International in Great Britain and Ireland (RIBI) is committed to promoting equality, fairness and respect. We aim to create an environment within Rotary in which individual differences and the contributions of all our volunteers are recognised and valued – where dignity and respect for all is promoted. Rotary with its base in ethical values and foundation in volunteering should reflect best practice and make explicit an expectation that Rotarians will give and receive dignity in their service. Abuse, harassment and bullying must not be tolerated. All complaints of abuse, harassment and bullying must be taken seriously and thoroughly investigated. If such behaviours are not challenged they can escalate and lead to significant difficulties for all concerned.

A good check as to whether volunteers are recognised and valued and whether dignity and respect is being promoted is to apply the Four-Way Test. This is the non-partisan and non-sectarian ethical guide for Rotarians to use for their personal and professional relationships. The Rotary Four-Way Test states:

Of the things we think, say or do:

These terms are included to help with definition and should be read for their everyday meaning.

3. Places where bullying and harassment could occur

Bullying and harassment doesn’t simply occur on a face-to-face basis at meeting or events. It also occurs in a variety of venues and mediums in cyberspace, where people ‘gather’.

With the more recent changes in technology, people have been drawn to social networking sites like Facebook, Twitter, and video sharing sites such as YouTube. As a result, there has been an increase in reports of cyberbullying on social networking sites and video sharing sites. In addition, instant messaging and texting are also places that appear to be common ways in which people are harassing others.

The online world of cyberspace is highly conversational by nature its aim to engage and inform. Individuals can be too quick to comment, share and retweet material, including jokes and other material that could be considered by others to be offensive and even defamatory.

All complaints of bullying or harassment should be dealt with under the appropriate and agreed Rotary Dispute Management procedures, regardless of whether or not the complaint accords with a standard definition. However, it is important to distinguish between bullying and behaviour that is reasonable in a particular context. For example there may be occasions where shortcomings in performance are being addressed, and more incisive or directive behaviour is interpreted as bullying simply because the recipient is unused to being challenged or asked to account for their actions.

Directive or assertive behaviour should always be carried out in a fair, reasonable and respectful manner. Under those circumstances, the matter should be dealt with informally but is unlikely to fall within the scope of this dignity policy.

Presidents, leaders and other Rotarians responsible for individuals involved must understand the policy and accept responsibility for implementing it. It is their responsibility to:

It is recommended that reports be produced on an annual basis. Everyone has the ability to help create and maintain a positive and inclusive environment free from bullying and harassment.

Everyone at all levels of Rotary, can help to do this by:

Both the complainant and the person the complaint is about should have access to support throughout the process of resolving the complaint (both in the informal and formal stages). Referencing the Rotary Dispute Management procedures, support could be available from:

(i.) the person with overall responsibility
(ii.) self-organisednetworkgroups
(iii.) another Rotarian
(iv.) Rotary District and/or R.I.B.I.

The dignity policy aims to resolve complaints as quickly, effectively and fairly as possible and maintain a positive environment. With this in mind, as far as possible, issues will be resolved informally. This allows for issues to be dealt with quickly and helps minimise damage to working relationships. An informal discussion will often help an individual to understand the effects of their behaviour and agree to change it. It is important that once a problem has been raised, the volunteer takes part in discussions with a view to addressing and resolving the problem. Such discussions will need to be carried out face to face or on the phone with Rotarians and leaders.

If a Rotarian feels they have been bullied, harassed or are unhappy with someone’s behaviour towards them, or have witnessed this happening to someone else, the Rotarian could:

If the matter remains unresolved the Rotarian should raise a written complaint under the formal stage of the Rotary Dispute Management procedures.

It is the policy that these matters are to be treated strictly confidentially and certainly not circulated by e mail – in order to contain matters where possible, reduce misunderstandings and potential further and wider conflict. However if an issue is reported, action may be taken without the consent of the person who feels he or she has been a target, without revealing their identity, in order to ensure compliance with this dignity policy principles throughout the environment. Dignity issues are more likely to be resolved where complainants are willing to identify themselves, and this policy will encourage Rotarians to do so, with appropriate support.

8. Why Rotary Needs to Address this Issue

Harassment and bullying can have very serious consequences for individuals and Rotary. Harassment or bullying may make people unhappy, cause them stress and affect their health, family and social relationships, affect their volunteer performance and could cause them to leave Rotary. Effects on Rotary can include loss of morale, poor attendance increased turnover of member’s, possible legal claims and damage to Rotary’s reputation. Rotary must be clear it will not tolerate bullying and harassment of any kind. All allegations of bullying and harassment will be investigated and if appropriate, action will be taken.

Rotary will review the outcomes of cases where complaints of bullying and harassment have been made to check that the proper and appropriate procedures have been followed and to identify any points that can be learned from those cases and implement any necessary changes.

Rotary will also periodically monitor how successful it is being in creating an environment free of bullying and harassment by other means which may include confidential surveys.

Rotary will also not tolerate victimisation of a person for making allegations of bullying or harassment in good faith or supporting someone to make such a complaint.

Although it is easy to categorise behaviour that arises through bad faith, it is considerably less easy to recognise that hurt or offence can be occasioned to others through carelessness or inattention towards them even with seemingly good intentions. The following examples of unacceptable behaviour, although not exhaustive, are designed not to frighten but to inform.

Victimisation because the person has been involved, or is suspected of being involved, in a complaint: 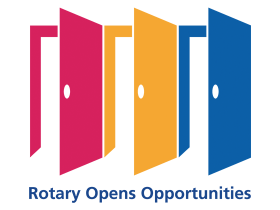 The slogan of Rotary for the 2020/21 year is that our organization opens opportunities. Join us, get involved in a project, and find out for yourself!

This website uses cookies to improve your experience while you navigate through the website. Out of these, the cookies that are categorized as necessary are stored on your browser as they are essential for the working of basic functionalities of the website. We also use third-party cookies that help us analyze and understand how you use this website. These cookies will be stored in your browser only with your consent. You also have the option to opt-out of these cookies. But opting out of some of these cookies may affect your browsing experience.
Necessary Always Enabled

Any cookies that may not be particularly necessary for the website to function and is used specifically to collect user personal data via analytics, ads, other embedded contents are termed as non-necessary cookies. It is mandatory to procure user consent prior to running these cookies on your website.

SAVE & ACCEPT
Go to Top